Hashimoto’s and Gluten | My Experience & Is Going GF enough?

When I was first diagnosed with Hashimoto’s disease at 17, I thought that it was this super rare, uncommon ailment that I was doomed to suffer alone. Or at least that’s how my endocrinologist made me feel at the time. However, the feelings were completely unfounded. Hashimoto’s effects millions of Americans and is commonly referred to as the number one cause of hypothyroidism. An autoimmune disease that attacks your thyroid, Hashimoto’s is pretty serious business… business that I totally felt. I felt the fatigue, suffered the hair loss, and rebelled against the thought of medication. Truthfully, medication brought much more added stress than relief. My first feelings of prolonged relief came from giving up gluten. But, was it enough? Do I still stick with it?

WHY GO GLUTEN FREE WITH HASHIMOTO’S

One of my favorite resources for the gluten thyroid connection is Dr. Tom O’Bryan. He explains it best, and  teaches us that gluten is very molecularly similar to the thyroid. Hashimoto’s is characterised by your immune system suddenly turning against your thyroid and attacking it as if it were an invader, so anything that looks molecularly close to your thyroid spells out problems. Your body is producing antibodies to attack your thyroid, so adding in more molecules that look like your thyroid spells problems. It can cause more antibodies, and damage to your gut lining, creating a vicious cycle. Thus, going gluten free is a natural choice for those suffering from hashimoto’s.

I never actually got a firm diagnosis of being gluten intolerant until I was 20, and I didn’t really take it 100% seriously a few years later.

Regardless of my rebellion against going totally gluten free at times, I did feel some relief from going gluten free even with the occasional cheat that I had. Gluten did indeed aggravate my disease by making me much more fatigued, causing serious headaches, and making all of my symptoms much more difficult to manage regardless of what medication I was on.

However, going gluten free still left something to be desired. I didn’t feel good enough to call it quits from there. So often, we hear that we just need to go gluten free to stop further reaction, but I felt that there was so much more to it than that.

The PC answer? Yes and no. We’re all bioindividuals so we react to everything differently. However, autoimmune disease is characterized by a damaged gut. If you have an autoimmune disease it’s pretty safe to say that your gut is mad at more than just gluten. That’s why so many people benefit from further anti inflammatory diet and gut healing. What’s my verdict? 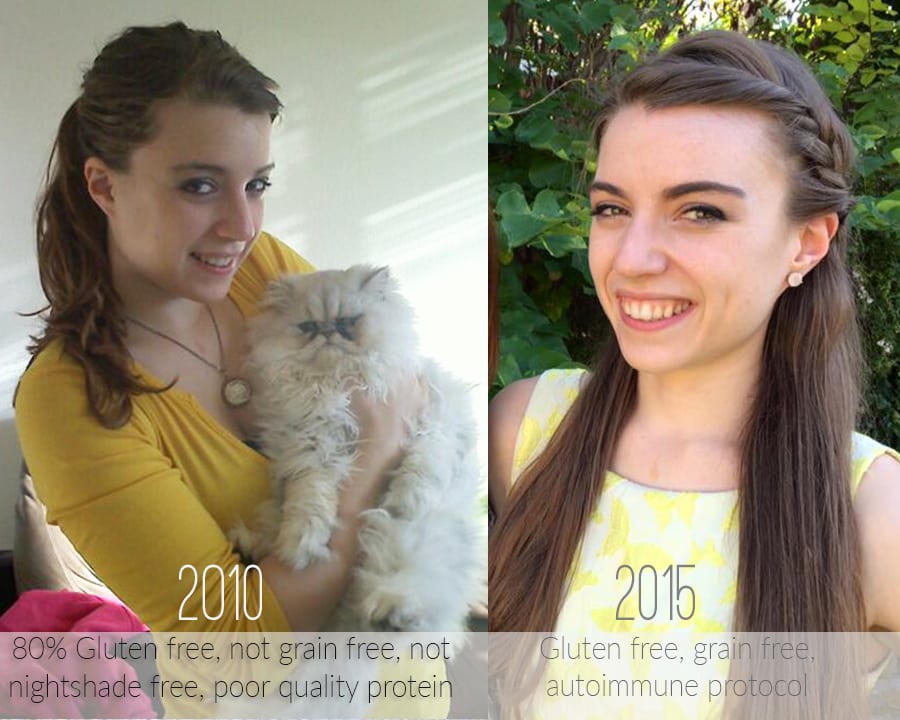 When I was just gluten free (granted, I did cheat every so often) I was still sick. I still had high antibodies, I was fatigued, my face would swell and I always had this feeling of not being able to open my eyes fully… probably because I was so tired! I realized that there was more to my journey and healing than just cutting out gluten.

After going through a lot of gut healing, following an autoimmune protocol, and eliminating more foods that I found were inflammatory to me, I experienced a huge change. My skin got brighter, I had more energy, and I felt more alive!

So, how does one actually heal their gut? Going gluten free plays a part in healing, but it’s not the end all be all for most. Healing your gut requires a lot more time, added elimination, and nourishing. It’s not just about eliminating, it’s about adding as well. Eliminating inflammatory foods is just step one and it will come along with some benefits. You’ll notice your symptoms lessen, but this is just a bandaid for the most part.

To heal further and experience lasting results, nourishing your body is required. This means physically healing your damaged gut with things like bone broth, adding a probiotic source such as a supplement or fermented food to reinoculate your gut with good bacteria and consuming nutrient dense foods like kale, sardines, and liver. Yes, I said liver. One of the most nutrient dense foods, liver helps add back vitamins and minerals that we’ve been depriving ourselves of, and that we were unable to properly absorb while consuming foods like gluten.

I actually had Mickey Trescott’s liver pate for the first time this past week and was so pleasantly surprised by how good it tasted! Just spread it on some carrots and you’re good to go.

Everyone’s healing journey is different. Though I benefited from removing gluten as well as grains, legumes, seeds, and pasteurized dairy, I recognize that not everyone is me and what you need is different than what I need.

I’ve been on this Hashimoto’s/ gluten free journey since I was 17 and it’s an uphill battle. Sometimes I slip and fall and other times I thrive. It’s all been about finding what works for me in the moment… no what works for someone else, and not just relying on what worked 5 months ago.

My best advice is to make this journey your own! And to stock your pantry with some cassava flour 😉 that stuff is good and gluten free 😛

Are you gluten free? Is it enough for you, or have you gone through more healing?

Matthew 11:28 “Come to me, all you who are weary and burdened, and I will give you rest.

5 comments on “Hashimoto’s and Gluten | My Experience & Is Going GF enough?”

4shares
Thanks for subscribing! Please check your email for further instructions.