Is Dairy Bad For You? The Case for Raw Milk, Ghee, and Goat Dairy in a Real Food, Paleo Diet

In the world of AIP, dairy is off limits, and with good reason. You’re trying to figure out what doesn’t work for you body, and get all of the potential irritants out. Many people do have issues with modern dairy, and even properly raised and prepared dairy, so by no means is it a sure fire health food for everyone. However, dairy is rarely seen as a health food, period. Rather, it’s a gray area that most people find easier to just avoid. But is it really all that bad? Are you better off buying alternatives like almond or rice “milk”? I’m going to take a closer look at other forms of dairy such as raw milk, ghee, and goat dairy to try and debunk the myth that all dairy is evil.

Is dairy a good option for everyone? No. Many have serious allergies, and find much benefit from eliminating it to let their body heal. I’m not at all suggesting that everyone should have dairy. We’re all bioindividuals with different needs.

Moving past allergies, does any dairy at all fit into a paleo diet? Like I said, it’s a gray area. There are a few different approaches with the paleo movement. In terms of “strict-paleo” we think of eating how the cavemen ate. Personally, I think of myself as more of ancestral/ real food diet follower. It’s more realistic in my mind when I realize that much of the food we have today wasn’t in a caveman’s diet and vice versa. Cavemen probably weren’t eating tuna from cans nor where they getting their bacon from Costco. Even vegetables that we have today probably looked very different than they did when they were being consumed in caves. My ancestors ate local, real food, and that’s what I’m going to do. There fore, I decided to entertain the idea that dairy could be a good food for me if it was local, properly raised, and a from a whole or raw source.

Let me start out by saying that pasteurized milk is a bad idea, yes. Pasteurization was invented with the best of intentions. When people started moving to big cities, they hadn’t quite figured out how to bring the milk along from the farm with them safely. People were getting very sick from raw milk that they once enjoyed as it wasn’t handled properly. Think of any other raw meat… you can’t leave it in your car for hours, right? Raw milk is no different that it develops harmful bacteria if improperly handled. So, pasteurization was born as an easy fix. Essentially, boiling the living daylights out of the milk killed the bacteria, but it also kills the good stuff like the vitamin content, and the flavor. I don’t like to dwell on the word “calories”, but really, pasteurized milk is nothing but empty, flavorless calories.

Even organic milk is a bad idea. Why? Organic milk doesn’t necessarily mean it’s grass-fed. It matters that animals are properly fed and raised because if it’s not a healthy animal, it doesn’t produce a healthy product. Organic milk is still pasteurized, and it’s technically a bit better for you than conventional milk, yes, but how does it stack up against raw milk? Well, I made an infographic to make this all a bit cuter…

Raw milk is how our ancestors consumed milk. Weston A Price, a dentist who traveled a world studying different cultures and their diets observed dozen of cultures who enjoyed raw milk, butter, and cheese as a main staple of their diet. It was properly raised of course, and it was filled with beneficial vitamins such as vitamin A, K, E, and C. Dr. Price actually found that the link between health in all indigenous cultures was animal fat, which dairy provides an excellent source as well as organ meats, and so forth.

Raw milk has this weird, bad reputation for being unclean and unhealthy. People would rather drink almond or rice “milk” rather than “take their chances” with raw cows milk. Unfortunately, it’s not the easiest thing to find, but it’s out there.

I visit Lucky Layla Farms for my Dallas raw milk. It’s so delicious, and creamy! I don’t feel my best when I have pasteurized milk, but raw milk leaves me feeling great. That’s because the pasteurization kills the lactase, which is needed to properly digest the milk. I still don’t drink it often, but when I do, it’s a great treat. It doesn’t work for everyone, but many people who can’t tolerate pasteurized milk, do well with raw milk.

Butter is another one of those that people have as a fear food. I remember talking to a rather slender, seemingly healthy girl in college who told me she doesn’t touch the stuff for fear that she’d get fat and only sticks to margarine and other butter-esque oily products. I must admit that I was the same way for quite sometime. However, I was moving in the completely wrong direction.

These butter substitutes literally just aren’t good for you, and are harmful to your health. How many times do we see people cooking with “butter-spray” made from soybean oil and other mystery oils? Sally Fallon tells us in Nourishing Traditions that these are bad news, period, but even worse when they’re used for cooking. When heated, these oils go rancid and are characterized as free radicals. What does they do to our bodies when we ingest them? Well, they attack our cell membranes causing damage to our DNA. It causes premature aging, it damages the organs, and contributes to plaque buildup. Phew… thanks Sally for the knowledge bombs. They’re just bad news, okay?

However, butter itself is a stable cooking fat that isn’t going to wreck havoc when we cook them, and when it’s from a grass-fed source (Kerry Gold, anyone?) it’s full of the same beneficial vitamins that raw milk has.

Butter isn’t for everyone. Even when I get butter from a good source, I feel a little foggy. That’s where ghee saves the day. Ghee is clarified butter which is just pure butter fat. Amazing brands like Tin Star Foods are lab tested casein and lactose free, so I eat this will no adverse effects what so ever. And you know what? Ever since I’ve been eating it consistently, my skin is better! Again, not everyone can tolerate it and the autoimmune protocol avoids it as well.

Some people just straight up don’t like goat cheese. I am so not one of those people. I can eat goat cheese with a spoon and drink goat milk like a fish. It’s almost a problem. Just as everything else in this world, it doesn’t work for everyone, but it’s known to be much easier to digest than cows milk for many people. Think of duck and chicken eggs. Many people (including myself) have an easier time having duck eggs than chicken eggs, and I too have a much easier time with goat dairy than cow dairy. It contains less lactose than cows milk which is what makes it easier for many to digest.

Goat milk is a bit fattier (thus more delicious in my book), it’s higher in calcium and magnesium, and though the flavor is an acquired taste, I think it tastes amazing!

But, don’t go grabbing the goat milk off the shelf just yet. I’ve found that goat milk in stores can have carrageenan, an unnecessary food additive. It’s best to get goat milk from a local source so you can ask your provider how the goats are raised, support local economies, and have a product that you can trust is more natural. Goats are easier to raise than cows, so goat farmers are easy to find. I buy my goat dairy which includes both milk and yogurt from Hidden Valley Creamery and I’m not going back to almond milk anytime soon! 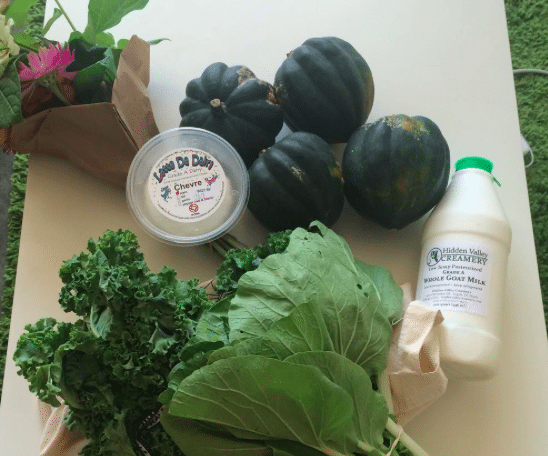 I pick it up about once every two weeks along with some local goat cheese when I visit my local farmers market. I don’t go through it terribly quickly as I’m on a rotation diet, but I have to restrain myself from finishing it all in a couple of days.

When it comes to real, whole foods there is no “bad” food. Properly raised dairy has been a healthful food for many people for many hundreds of years. If it works for you (and it may not), then butter up your life ASAP! The world needs more butter, people. But I digress, if you have an intolerance to dairy products, there are still many other perfectly healthful options for you! Don’t feel left out.

What form of dairy to you consume? Butter? Raw milk? Goat milk? Or do you have to avoid it?

2 comments on “Is Dairy Bad For You? The Case for Raw Milk, Ghee, and Goat Dairy in a Real Food, Paleo Diet”

5 shares
Thanks for subscribing! Please check your email for further instructions.