Are nightshades overwhelming you? Here’s your complete guide to nightshades featuring a full list, why you may want to avoid them, and substitution recipes! 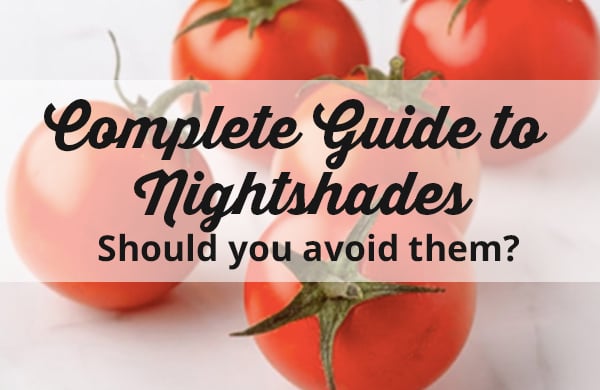 Nightshade vegetables seem like healthy, nutrient-dense additions to any diet. Tomato is known as a cancer fighter, bell peppers are commended for their nutrient density, and eggplant is a common low carb swap. However, not everyone can tolerate nightshade vegetables and many deal with inflammation and aggravation of chronic illness as a result of eating nightshades.

Nightshades belong to the Solanaceae family and include thousands of edible and inedible plants.

These are the common nightshades… 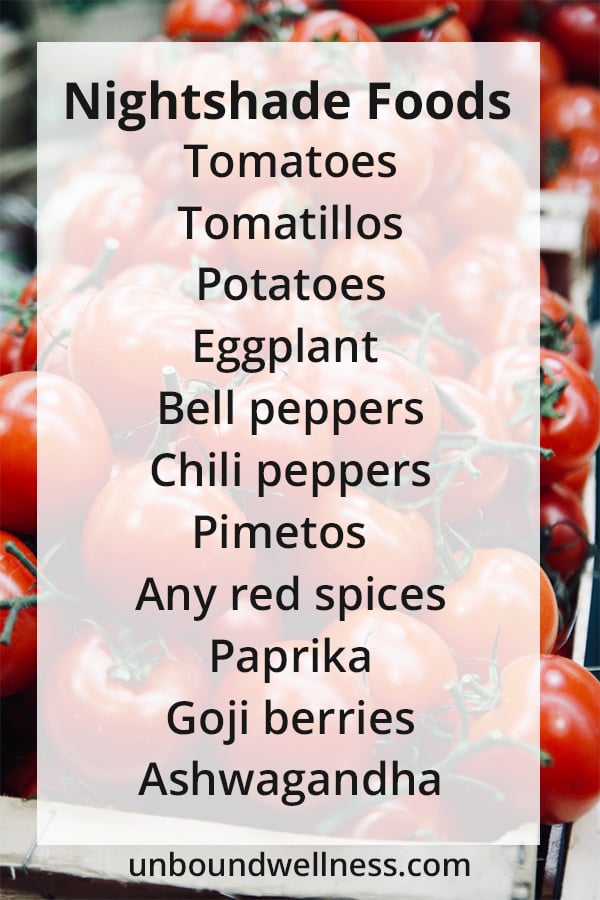 Common foods that are mistaken for nightshades, but are not…

Are nightshades inflammatory? Should you avoid them?

Not necessarily. Nightshade vegetables do have a lot of nutrient density on their own and can be a healthy part of a balanced diet for many. By no means would I ever suggest that the human race as a whole needs to go nightshade-free.

However, nightshades are known to be inflammatory for many and can flare up joint issues, digestive symptoms, and other inflammatory diseases. Those with the following conditions are certain groups of people that may have nightshade issues…

Many compounds within nightshade vegetables have been shown to cause inflammation in some cases. For example, potato glycoalkaloids have been shown to impact intestinal permeability and “IBS” issues (source 1), thus, causing digestive distress as well as other related issues. Solanine (which is a glycoalkaloid) and is found in eggplant and potatoes can actually have toxic effects if eaten in excessive amounts (source 2).

Also, saponins which are found in nightshades have been shown to impair digestion and limit nutrient uptake (source 3).

Finally, capsaicin which an alkaloid found in peppers is often known to have anti-inflammatory properties, but it has also been shown to have the opposite effect (source 4).

Thus, not every food will have the same effect on every person, but there is reason to consider nightshade intolerance if certain symptoms and concerns are already an issue.

What are the common symptoms of nightshade intolerance?

Everyone is different and your symptoms will vary. But typically, you can look out for these symptoms…

Have one of these conditions but don’t feel like you have nightshade issues? I was in the same boat. I didn’t particularly feel a difference when I ate tomatoes, so why would I avoid them? Not having an obvious reaction to an inflammatory food is common, and doesn’t necessarily mean it’s not inflammatory for you. What can happen is that our body can be so inflamed that we just don’t notice the nuances anymore. That’s why elimination diets like the autoimmune protocol are the gold standard for nailing down food intolerance as they allow your body the chance to anti-inflame so you can actually determine whether or not you have a reaction when you reintroduce the food.

Many nightshade ingredients hide in otherwise healthful foods. Here’s how to spot them…

How do you substitute nightshades in recipes?

Does being nightshade-free mean that you have to live without the flavors forever? Absolutely not! There are so many ways to fake it. Here are some of my favorite substitutes for nightshade heavy dishes…

How to make substitutions for tomatoes…

How to make substitutions for eggplant…

How to make substitutions for potatoes…

How to make substitutions for red spices…

Can nightshades intolerance be healed?

It’s 100% possible. It all depends on how your body heals, and your own bio-individuality. For someone like me, I’m not sure if I’ll ever be able to reintroduce nightshades. I just have such a gnarly reaction to red spices, peppers, and potatoes. However, tomato is the one nightshade that I can be slightly flexible in moderation.

Many people do reintroduce nightshades, but it really just depends. It may not be in the cards for everyone, but there certainly is hope! Following an elimination protocol that allows for healing and slow reintroduction like the autoimmune protocol is an amazing way to tackle this.

Regardless, I hope this list helped you see how much opportunity there is to substitute nightshades, and how to live with the intolerance!

This article was originally published in August 2018 and was updated in December of 2019.

118 comments on “Nightshade Food List : Should You Avoid Them?”

1637 shares
Thanks for subscribing! Please check your email for further instructions.